The site may have been quiet for the last few weeks but plenty has been going on behind the scenes, with two books scheduled for the summer. Both are in the final stages of writing but as soon as they're ready to go, they will be available. That's how I like to do things - not pencil it in for six months later.

The next scheduled release is "Show Some Respect - The Sound and the Fury of Junior Football" by Chris Kirkham. As a qualified coach running a junior club, Chris has been looking at how the Respect campaign has affected football at that level. Chris has put hours of research in and it promises to be an eye opening read.

Next up we have "In Some Strange Way - Another Nine Month Sentence" in which Hinckley United fan Nick Castle gives us a insight into following a club in the Blue Square Conference North. Nick's got some great cover art and a draft front cover can be seen below: 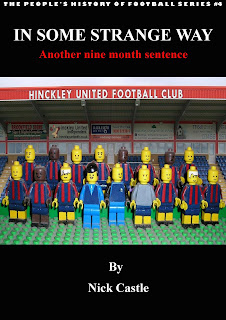 Watch this space for release dates...
Posted by Stewart Smith