A thank you from Luke

I asked Luke Williamson, author of I Had a Wheelbarrow, if he'd write me a few words for the website. Here's what he said:

I first got in touch with Stewart in late January 2011 after a small publishing deal I had fell through. I was at a difficult stage at the time as I had a book more-or-less complete but suddenly without any support. However, from our first e-mail to release, little more than twelve weeks passed us by. The support and encouragement I received was fantastic the final product was excellent, so much so, Stewart became involved in its release as well. It can be quite daunting making those final steps across the finishing line but I fortunately had someone on hand to help me along the way and for that I will always have much respect and gratitude to Stewart.


Thanks Luke. From my perspective, I've loved doing this project. A book I've really believed in and an author I've built a good rapport with. Sales are off to a steady start and its yet to hit the High Street or Amazon yet (official publication May 9th), so its a case of so far, so good.

I Had a Wheelbarrow now available

After a white-knuckle ride with the printers, I Had a Wheelbarrow is now officially available. Initially, the book is available exclusively at the Notts County club shop, as well as on-line here and at www.ihadawheelbarrow.co.uk. The author Luke has had a busy week, being interviewed for the Notts County website and well as having a photo shoot with the Nottingham Post. Click here for an article on the book from the official Notts County website.The book will be released officially on May 8th 2011. Click the "Buy Now" button to buy direct... 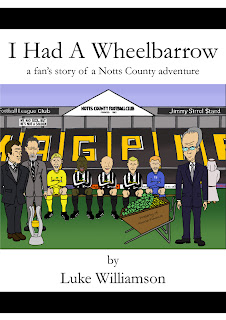